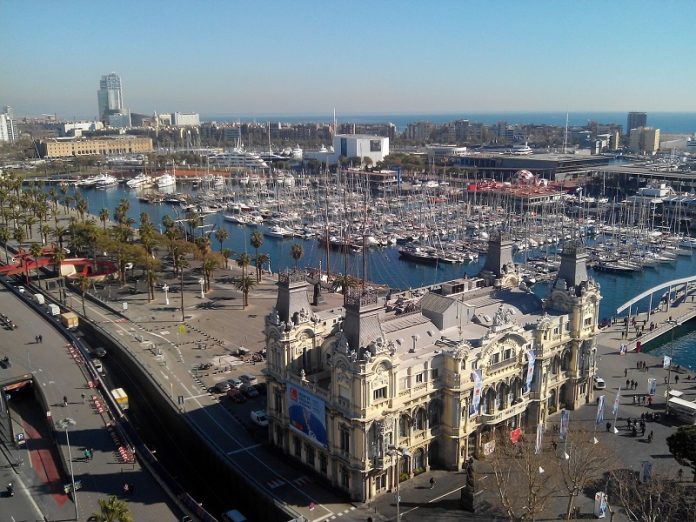 Are you planning a trip from Barcelona to Madrid?

Or perhaps you’re a football fan preparing for an El Classico football match.

These are 2 of the most popular cities in Spain and we know exactly how you can make the most of this experience on a road trip.

We’ve uncovered a route that anyone can enjoy on the way to Madrid.

Continue reading to discover 11 places to stop driving from Barcelona to Madrid by car.

Rent a Car in Barcelona

Welcome to the Catalonia capital of Spain!

This vibrant waterfront city is a must-see, so we recommend spending at least one to two days exploring the many sites. 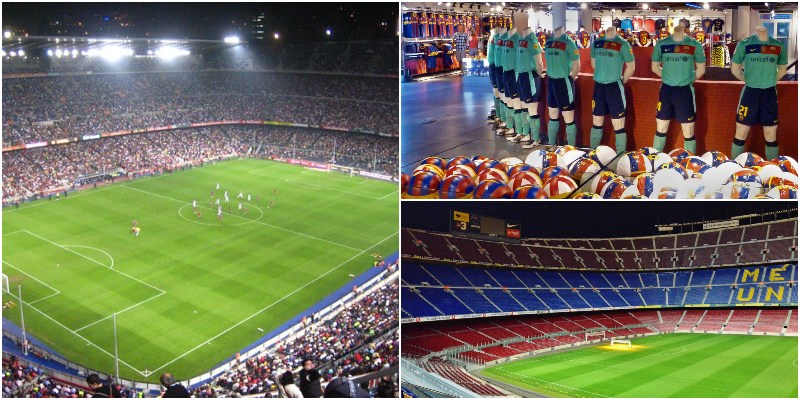 Spain is known for its football players, which means no trip to the Spanish city of Barcelona is complete without seeing a game at Camp Nou.

Camp Nou is the home stadium of FC Barcelona.

This makes Camp Nou the largest stadium in Spain and Europe combined, which is an experience in itself.

The football season in Spain is long, running from August until the following May each year.

There is a good chance a game will be on when you visit!

Don’t miss out on this incredible cultural experience at Camp Nou. 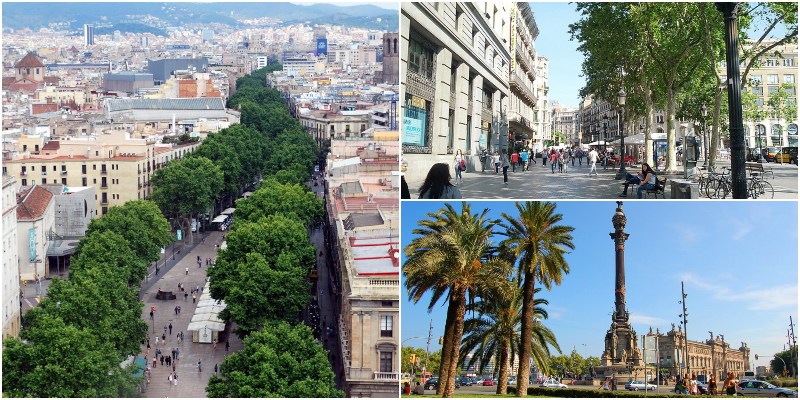 No trip to Barcelona is complete without going for a stroll on the famous Las Ramblas.

La Rambla is the name of a central street in downtown Barcelona.

It is a tree-line pedestrian strip that is lively and vibrant at almost all hours of the day.

Las Ramblas stretches all the way from the Christopher Columbus Monument by the water to Plaça de Catalunya.

It spans 1.2 kilometres in total.

Many popular Barcelona sites are along this street, but there are also a myriad of shops, restaurants, and bars.

Although it can get crowded at times, it is an ideal place to go for a walk or do some people watching.

Upon arriving in Barcelona, you will likely become acquainted with the work of Catalan architect Antoni Gaudi.

Gaudi’s unique style of architecture is seen all over Barcelona, but no works of his are as famous or as impressive as Sagrada Familia.

Sagrada Familia is a Roman Catholic basilica in the heart of Barcelona.

It has been considered a UNESCO World Heritage Site for many years and was constructed in the late 19th century.

Today, it is open to the public and tours will take you around the property, as well as inside the church.

Expect to see architecture like you’ve never seen before, as this daring style (very modern for its time) combines both the Gothic and Art Nouveau styles! 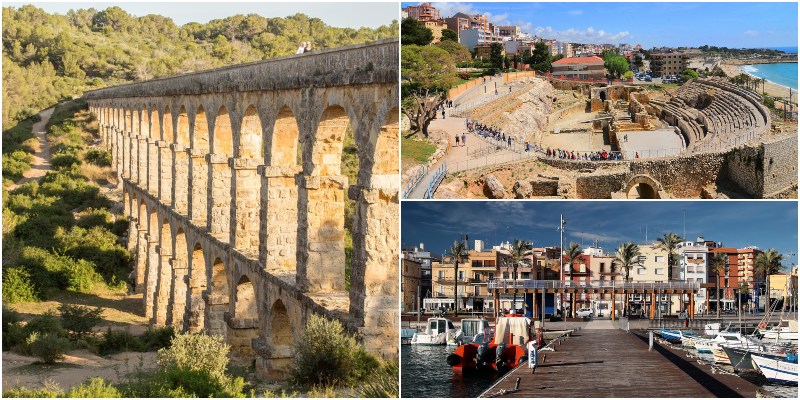 Once you feel that you’ve had enough time to appreciate all that Barcelona has to offer, it’s time to hit the road!

Your next stop is none other than Tarragona, a small port city in northeastern Catalonia.

Tarragona is known for being the home of many ancient ruins from when it was previously part of the Roman colony, Tarraco.

Specifically, the ruins of the Roman Amphitheatre are a main attraction here.

The theatre is a sight to behold, overlooking the Mediterranean Sea and dating back all the way to the 2nd century.

Old Town, the Forum, and the Necropolis are also popular sites.

And don’t miss out on going for a walk along the Passeig Arqueològic, a walkway that goes along the ramparts and offers scenic views of Tarragona down below. 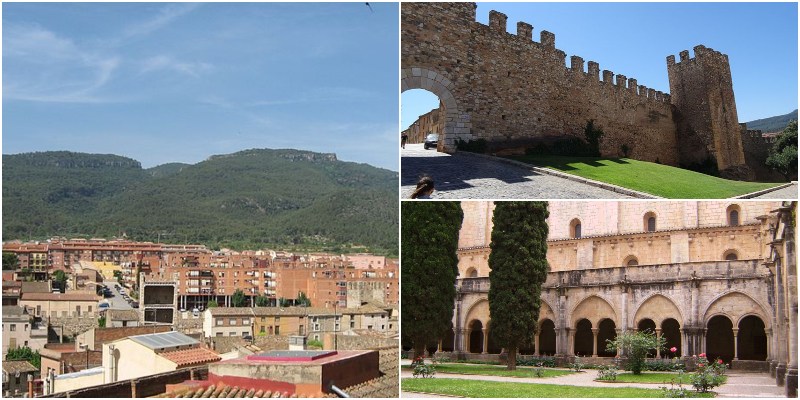 Roughly half an hour from Tarragona lies the medieval town of Montblanc.

Montblanc is part of Catalonia and is set on the foothills of the Prades Mountains.

The town is known for being a well preserved medieval site, with the stone walls that surround it still intact.

Bover Tower and St Jordi’s Gate are other medieval sites that date back to the 13th century.

There are also many Romanesque and Gothic monuments in town, so going for a stroll through this quaint region is a must.

Further, Montblanc is less than than 10 kilometres from Monestir de Poblet, a Cistercian monastery and UNESCO World Heritage Site. 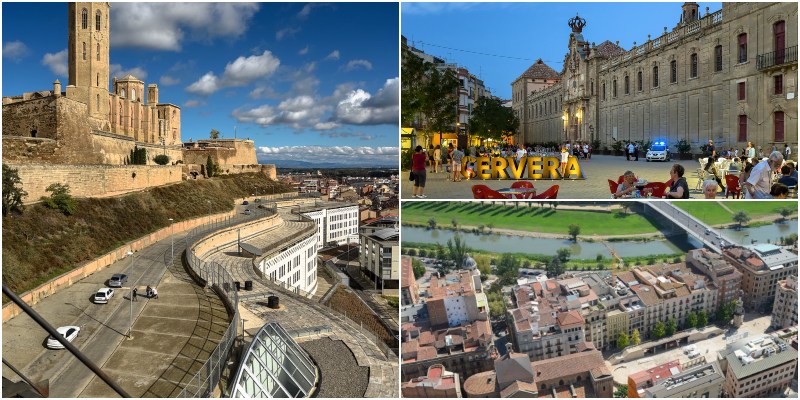 Continue venturing further into Catalonia and you’ll come to the ancient city of Lleida.

This Spanish city is less than 45 minutes from Montblanc by car.

It is filled with historic sites, such as La Seu Vella, a Gothic-Romanesque cathedral and the Castle of Gardeny, which dates back to the 12th century.

La Seu Vella sits on a hilltop, so you’ll be able to spot this site from almost anywhere in the city.

The views from the cathedral’s grounds are also incredible.

While in Lleida, be sure to visit Eix Comercial de Lleida, a pedestrianized shopping area, with many stores housed inside historic buildings.

Parque de Los Campos Elíseos is also a beautiful spot to go for a stroll or have a picnic. 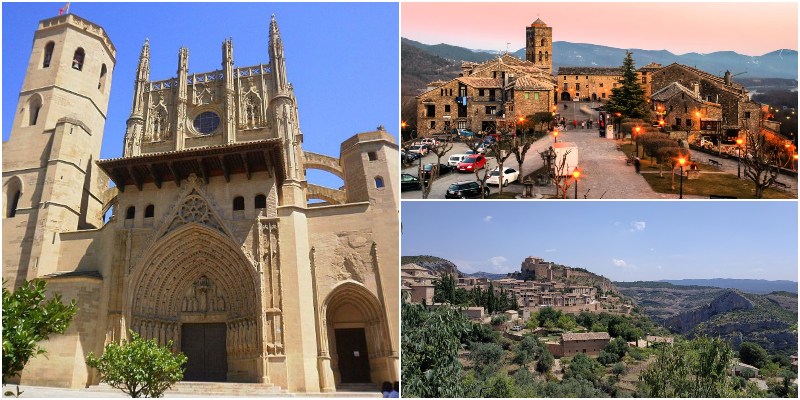 For something out of a postcard, look no further than Huesca, Spain.

Huesca is a little over an hour by car from Lleida, but is well worth the trip.

This small city in northeastern Spain is mostly located on a hill.

Many of the buildings date back to the medieval era, including the Gothic Huesca Cathedral.

It is a Romanesque monastery that houses the tombs of two former Spanish kings.

The 11th century Castle of Montearagon is also not too far from Huesca and serves as both a chateau and monastery.

Lastly, don’t miss out on Parque Miguel Servet, a park and garden that features all kinds of colourful sculptures from Huesca-born artist Ramón Acín, as well as a picturesque lily pond. 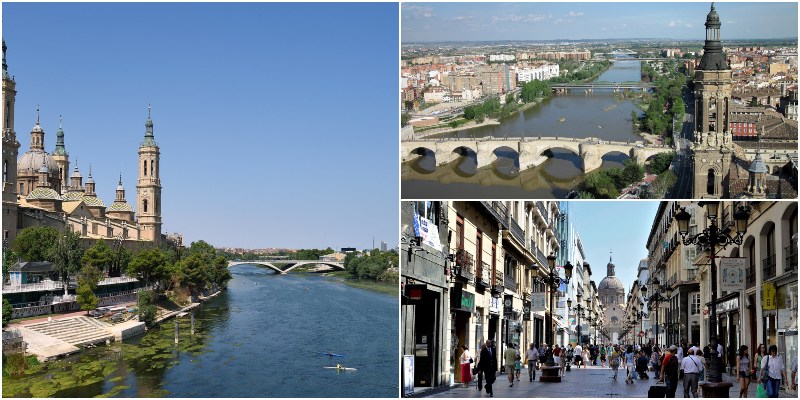 Your next stop? Zaragoza!

This city is located in Spain’s Aragon region.

It sits on the banks of the Ebro River and has a different vibe from the towns and cities that make up Catalonia.

In the centre of the city, you’ll find the baroque-style Nuestra Señora del Pilar basilica.

It is famous for being a pilgrimage site throughout history and has a shrine to the Virgin Mary.

Unlike other Spanish cities, Zaragoza has many buildings that combine Islamic and Gothic architecture.

Examples of this are the Aljafería, an 11th-century Moorish palace, and the 12th century Cathedral of the Savior.

Zaragoza is also known for its folklore and its incredible food scene. 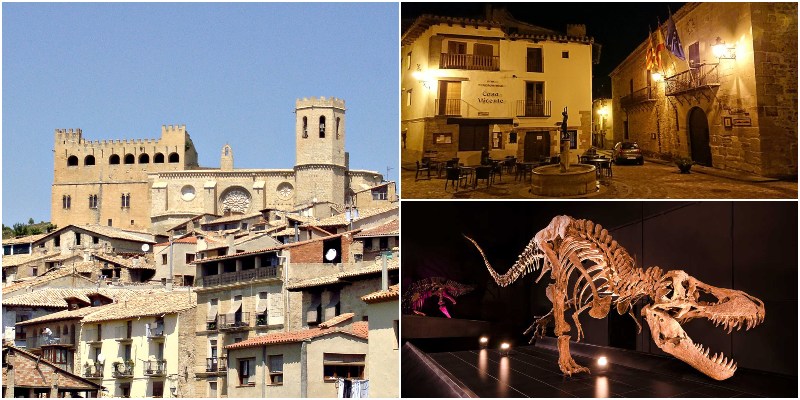 Continue making your way through the province of Aragon and you will eventually come to Teruel.

Teruel is an elevated city in Aragon’s mountainous region.

The Santa María de Mediavilla Cathedral and The Torre de El Salvador are two of the main sites in Teruel, the latter of which can be climbed and boasts panoramic views from the top.

Dinópolis Teruel is another popular attraction, especially if you’re travelling with children.

It is one of the largest paleontology museums in the world, and has a restaurant and many shows throughout the week.

Lastly, be sure to go for a stroll around Plaza del Torico, a historical landmark. 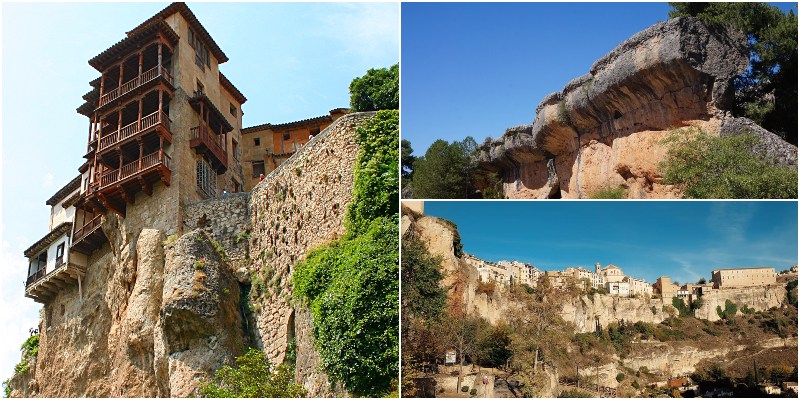 This east-central Spanish city is built right into the mountains, which gives it a unique look like you’ve never seen before.

The town was originally founded by Moors and has kept its stone walls around the exterior.

Within Cuenca, you will find steep cobblestone streets and plenty of medieval architecture.

There are even the ruins of a medieval castle in Cuenca.

However, the most famous site in this town is undoubtedly the “Hanging Houses,” buildings that sit on the edge of limestone cliffs overlooking the Júcar and Huécar rivers.

Although they are referred to as houses, they are in fact civil buildings.

The Hanging Houses today are made up of restaurants, and even a local museum, the Museum of Abstract Arts. 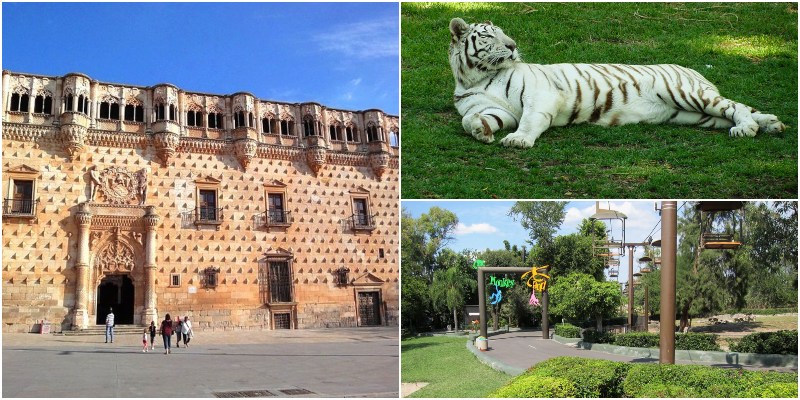 As you start to make your way closer to Madrid, you will come to the city of Guadalajara.

Guadalajara is the capital of the province and is located on the Henares River.

Within the province of Guadalajara you’ll find a number of attractions.

These include the Guadalajara Zoo, Palacio de la Cotilla, Pantheon of the Duchess of Sevillano, and the Palacio del Infantado Guadalajara.

Overall, Guadalajara is an idyllic place to make a stop on any Spanish road trip from Barcelona to Madrid.

Alcala de Henares is the last stop on your road trip!

Just over half an hour from Madrid is where you’ll find this central Spanish city.

The city is mostly known for being the home of University of Alcala, which is housed inside beautiful historic buildings that date back to the 16th century.

There is a museum here, called the Cervantes Birthplace Museum, that is dedicated to his life and works.

Congratulations – you’ve arrived in the capital of Spain!

We hope your Barcelona to Madrid road trip has been worth it, but rest assured, Madrid is the ultimate final destination.

We recommend spending a couple days here to fully take in this bustling locale. 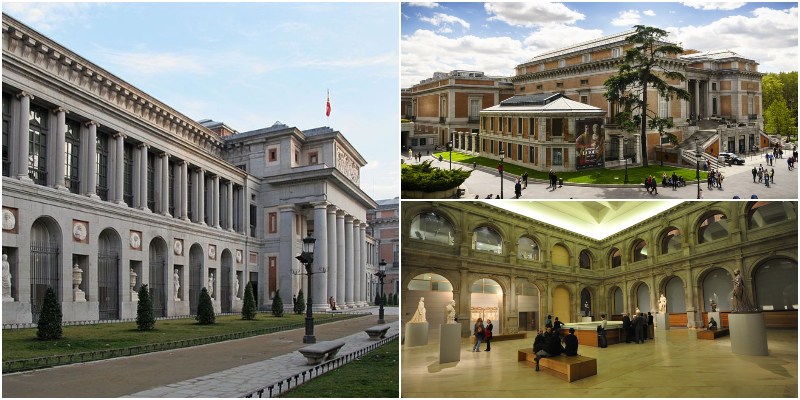 Museo Nacional del Prado, otherwise known as the Prado Museum, should definitely be your first stop in Madrid.

This world-renowned institution is one of the most famous museums in existence.

When it first opened in the early 19th century, it was originally dedicated to paintings and sculptures.

However, it quickly grew to become one of the most impressive art museums in the world.

Walking through the museum, you can expect to see works from such artists as Francisco Goya, El Greco, Titian, Peter Paul Rubens, and Diego Velazquez. 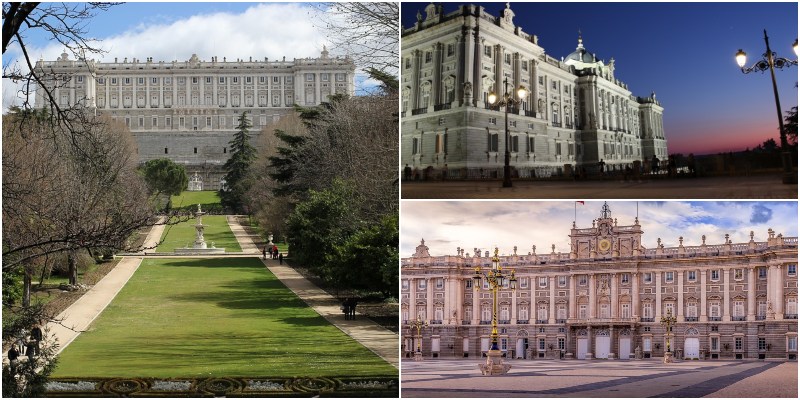 Live like royalty while in Madrid and visit the Royal Palace and Gardens.

This stunning estate is the official residence of the royal family of Spain.

Today, it is mostly used for state ceremonies.

The palace takes grandeur to a whole new level, with 135,000 square metres of floor space and nearly 3,500 rooms.

It is baroque and classical in style, with manicured gardens all around it.

The Royal Palace and Gardens are open to the public year round, except when it is closed for private events.

If you’re a football fan, then you won’t want to miss out on your chance to see the home of Real Madrid.

Santiago Bernabeu Stadium seats just over 80,000 people and has been the home stadium of Real Madrid since it was constructed in 1947.

It is the second largest stadium in Spain, after Barcelona’s Camp Nou, and is the largest in Madrid.

Be sure to grab tickets to a game and prepare for the sports experience of a lifetime.

Or visit on an off day, and sign up for a tour of the stadium.

From the cliffside town of Cuenca to the medieval city of Tarragona, we hope this list has inspired you to rent a car and drive around the beautiful country of Spain.

There is so much to see on any road trip from Barcelona to Madrid.

If you didn’t get a chance to see all the sites mentioned, rent a car from Madrid and enjoy another road trip experience driving back to Barcelona.

Rent a Car in Barcelona 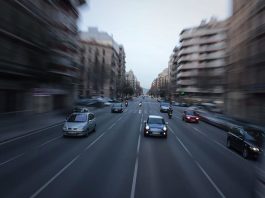