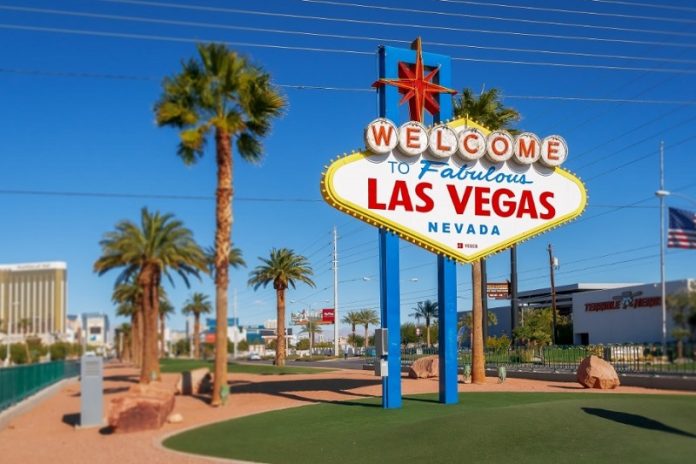 Are you thinking about a taking road trip from Las Angeles to Las Vegas?

Like most travellers, you’ll want to make the most of this journey and see some interesting places along the way.

But where should you stop?

We’ve done the research and found the most unique stops on this day trip.

Keep reading to discover the best places to see driving from LA to Las Vegas.

The first stop on your western US road trip is the Mormon Rocks!

This natural landmark is just over an hour’s drive from Los Angeles, near San Bernardino, California.

They are part of the San Bernardino National Forest and are located along Cajon Pass.

Mormon Rocks got its name after serving as a shelter and campsite for Mormon pioneers who were travelling west to California back in 1851.

These Mormons ended up founding the city of San Bernardino.

Today, some driver stop here for a quick break, while tourists can explore the hiking trails in the area.

Keep your eyes peeled for wildlife living in the area, such as lizards and owls.

For a rather unique pitstop, keep driving 33 minutes past the Mormon’s Rock and you will come to Elmer’s Bottle Tree Ranch.

This Route 66 stop is all about bottles!

At the Bottle Tree Ranch you will find tree-shaped sculptures made out of old glass bottles and other vintage items.

It is in essence, a forest of metal trees with bottles attached to them that serve as branches.

Visitors are encouraged to take a souvenir with them on their way out – a small piece glass!

Bottle Tree Ranch is entirely free to enter, however donations are accepted.

Route 66 is one of the most famous highways in the world.

Thus, it’s no surprise that there is an entire museum dedicated to it!

You will find the California Route 66 Museum in Victorville, south of Mojave desert

The museum opened its doors in 1995 and is largely run by volunteers and donors.

Exhibitions are focused on the history of Route 66, dating all the way back to pioneer times.

You’ll find photographs and artifacts that were part of the development of the highway, teaching visitors about the impacts on local culture and the economy.

As you’re driving through the desert along Route 66, you may have questions about what life in the desert is really like.

If this sounds like you, then make a quick stop at the Desert Discovery Center.

The mission of this public-run community education institution is to educate visitors on desert life.

The Center is the result of a partnership between multiple organizations including the Bureau of Land Management (who staff the site), the National Park Service, Barstow Community College, and more.

The prized specimen on display at the Desert Discovery Center is the Old Woman Meteorite.

This is the second largest meteorite found in the United States.

If you’re looking for a place to stop and grab a bite to eat, stretch your legs, or visit the restroom, then check out Barstow Station.

This rather unique rest stop was founded in 1975.

Barstow Station was created by Fred Rosenberg, who thought highway 15 could do with some livening up.

And so Barstow Station was born!

Today, Barstow Station is a mixture of shops and restaurants that serves bus and car passengers alike.

What you are sure to find interesting about the rest stop is that it is built to look like a train station.

Dining areas are housed in train cars and there is even a caboose (which serves as the bathroom) and a water tower on-site.

Restaurants at Barstow Station include McDonald’s, Wetzel’s Pretzels, and Subway.

For a taste of retro 1950s America, look no further than Peggy Sue’s Diner, another great stop if you’re hungry.

This classic diner is located in the town of Yermo, California, just 10 minutes by car from Barstow Station.

It is an original roadside diner that was built in 1954 with just 9 counter stools and 3 booths.

The eatery is set on the foothills of the Calico Mountains.

Since its opening, it has been a popular stop for drivers travelling between LA and Las Vegas.

It closed briefly but was reopened in 1987, which is when the owners decided to spice things up by adding their collection of movie and TV memorabilia to the decor.

Today, the diner is filled with fun and never before seen pieces of history, not to mention classic American food.

Their menu consists of everything from chicken fried steak and meatloaf to cheeseburgers, curly fries, and cherry coke.

It doesn’t get much more American than that!

For more sightseeing on your drive from Los Angeles to Las Vegas, why not stop in Calico Ghost Town?

This historic park was once a former mining town in San Bernardino County.

What remains is located in the Calico Mountains within the Mojave desert.

The town was originally a center for silver mining and was founded in 1881.

It was in the year of 1881 that the largest silver rush in California begun.

In order to mine as much silver as possible, 500 mines were created, and over the course of 12 years, 20 million dollars worth of silver ore was produced.

However in the 1890s, silver lost its value, which led to the miners packing up their things and leaving town.

Calico lost its population almost overnight and became the ghost town that it’s known as today.

In the 1950s, the town’s remaining buildings were restored and it is now a park showcasing what life was like in the late 19th century.

For a quirky stop along Interstate 15, keep your eyes peeled for the famous ZZYZX Road sign.

You will spot the sign roughly 45 minutes from Calico Ghost Town, south of the ZZYZX settlement.

It is believed that the name of the road was created by Curtis Howe Springer, a Methodist minister, in 1944.

Springer claimed it was the last remaining word in the English language.

Despite repeatedly being ranked as one of the most unusual place names in the world, the name of both the road and its corresponding settlement have endured.

Today, the area is managed by California State University, which has developed a Desert Studies Center there.

Whatever you do, be sure to snap a pic of this crazy road sign!

If you’re a fan of Greek food, then don’t miss out on the infamous Mad Greek Cafe located in the middle of the desert Baker, California.

Baker is home to less than 600 people and serves as a spot for refueling on the drive between Los Angeles and Las Vegas.

However, the Mad Greek Cafe is the main reason to stop here.

The cafe has been around for almost 30 years.

It is open daily 24 hours, convenient for drivers on a late night shift.

Try out their ever-popular gyro with rice and salad.

Also, don’t miss out on their thick milkshakes or their traditional baklava.

A stone’s throw away from the Mad Greek Cafe is the second biggest attraction in California, the World’s Tallest Thermometer.

This steel electric thermometer was built in 1991 to commemorate the record breaking temperature of 134 degrees Fahrenheit that was recorded in nearby Death Valley back in 1913.

The sign weighs over 75,000 pounds and is held together with concrete.

It is 41 meters tall and displays a maximum temperature of 134 degrees to acknowledge the 1913 record.

The World’s Tallest Thermometer is unsurprisingly very hard to miss.

It can be seen from three different angles when driving along Interstate 15.

There is even a gift shop at the bottom of the site in case you want to take home a souvenir!

Read the plaque at the bottom closely to learn more about the record-breaking thermometer’s history.

Alien Fresh Jerky is one of the wackiest stores you’re likely to ever come across – which is why stopping in for a visit while en route to Las Vegas is an absolute must!

This shop combines two things you wouldn’t normally put together: aliens and jerky.

Alien Fresh Jerky originally opened in 2000 in the nearby town of Crystal Springs, Nevada.

However, shortly after it moved a few miles down the ride and now resides in the town of Baker, California.

The store specializes in snacks and kitsch, with decor like you’ve never seen before.

It has an impressive range of jerky flavours with inventive names like “Abducted Cow Teriyaki” or “BBQ on the Moon.”

Other snacks include nuts, dried fruit, and hot sauce.

What really makes the store unique though, are the strange alien, UFO, and spaceship exhibits displayed around the store.

To see an important piece of history, you’ll definitely want to check out the Bonnie & Clyde Death Car.

The notorious gangster couple Bonnie and Clyde were gunned down by police in Louisiana in May 1934.

They died driving in their 1934 Ford V-8 automobile, but their legacy has lived on.

The car is ondisplay in Jean Nevada, with bullet holes still visible on the car.

160 bullets between 6 police officers were fired that day.

For those interested in seeing the car, the display is open to the public and admission is free.

Travel back in time to the Wild West at Good Springs, Nevada’s Pioneer Saloon.

Often used as a Hollywood set, the walls of Pioneer Saloon are covered in memorabilia from the old west.

This historic saloon is a great place to stop for a drink or bite as you near your final destination Las Vegas.

They serve American food with a Texas twist.

Try the “Ghost Burger” made with a half pound beef patty, secret Ghost sauce, and two strips of jalapeno bacon.

There’s also the all-day breakfast items like the “Country Benny” made with ham steak, eggs, and homemade hollandaise drizzle.

Wash this down with a classic milkshake then finish off a cheesecake for dessert.

The Good Springs General Store located next door is also worth a visit.

Did you know that just outside Las Vegas lies an art installation in the middle of the desert?

Drive 21 minutes past Pioneer Saloon and you will find the unique sculptures, Seven Magic Mountains.

The rocky towers were created by Swiss artist Ugo Rondinone in 2016.

Each one stands between 30 and 35 feet tall.

The site is located right off of Interstate 15, less than 10 miles south of Las Vegas.

It was setup by the Nevada Museum of Art and the Art Production Fund.

Seven Magic Mountains were originally intended to be open for two years.

However, due to their incredible popularity, the producers received approval to keep it at the current location until the end of 2021.

Needless to say, the Seven Magic Mountains are a great place for a photo opp before your road trip comes to an end.

But we still recommend one last pit stop before you settle in at your hotel.

And it is none other than the famous Las Vegas road sign!

The “Welcome to Fabulous Las Vegas” sign was erected in 1959 and is now a major city landmark.

The sign was designed by Betty Willis and is located at 5100 Las Vegas Boulevard South.

Standing at 25 feet tall, the Las Vegas sign lights up at night and is pretty much impossible to miss.

Be sure to safely stop along the road in order to snap a pic as you enter Sin City!

We hope this list has inspired you on your upcoming road trip from Los Angeles to Las Vegas.

As you now know, there are so many fascinating and unique places to see on this famous drive.

For travellers interested in doing the reverse trip, you can rent a car in Las Vegas and head back to LA. 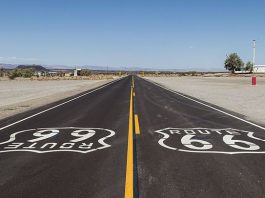 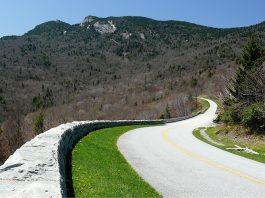 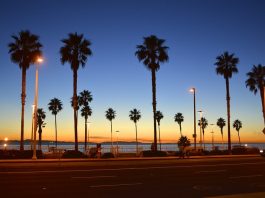