The Pacific Coast Highway is an incredibly scenic road in the American state of California.

This route is 1055 kilometres long and is an excellent road for a memorable road trip.

Drive down the highway to see stunning coastlines, cliffs, and beaches.

We’ve designed an itinerary that will take you from San Francisco to Los Angeles, but you can certainly do this trip from other cities as well.

So fasten your seatbelt and explore 12 of the best stops on the Pacific Coast Highway road trip. 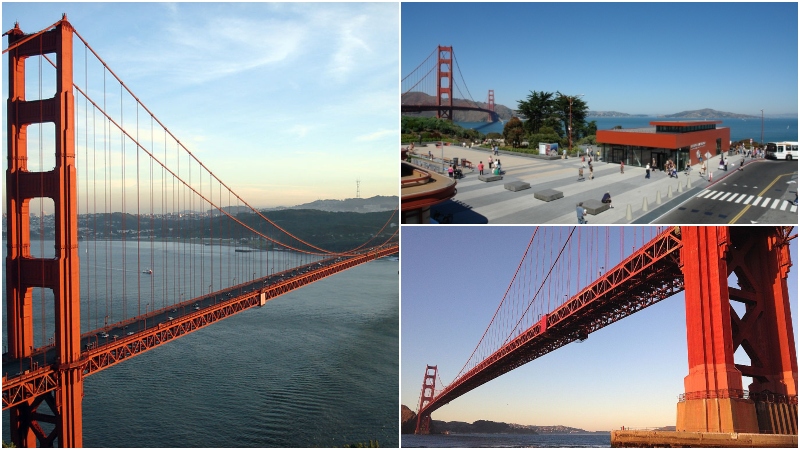 A road trip adventure along the Californian coast isn’t complete without a stop at the Golden Gate Bridge.

This iconic red bridge can be found in San Francisco.

The Golden Gate Bridge is featured in countless Hollywood productions, so you’ll have a chance to see your favourite movie coming to life.

Admire this architectural masterpiece and its beautiful surroundings from one of the numerous viewpoints in the area.

One popular stop to see the scale of the bridge is Hawk Hill, a viewpoint on the northern side of the Golden Gate Bridge.

For an epic side view, head to Black Point Battery on the western shore of the bay.

Before you leave San Francisco to continue the trip, go up to Twin Peaks to overlook the city and the bridge. 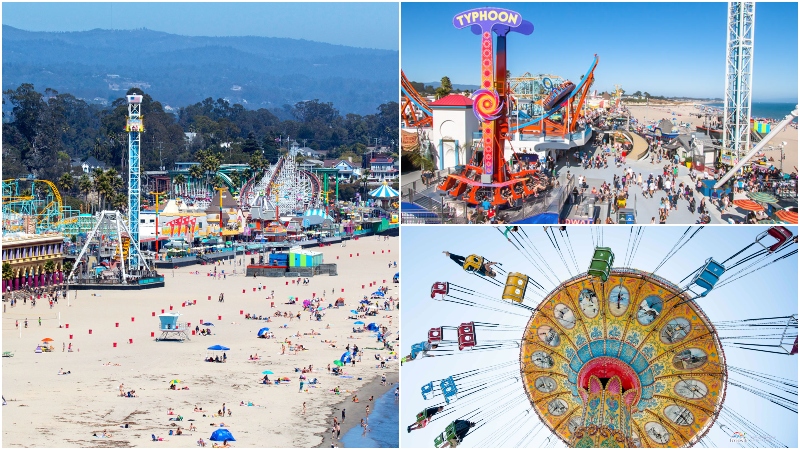 Santa Cruz Beach Boardwalk is an amusement park built on a long strip of beach.

The park has a wide variety of attractions, from heart-stopping roller coasters to family-friendly carousels and water rides.

To get an overview of this fun park and the picturesque coastline, ride the Sky Glider scenic cable car.

Other than thrilling rides and eateries, the Santa Cruz Beach Boardwalk has shops ranging from clothes stores to souvenir outlets.

Nearby, the Santa Cruz Wharf is another interesting place to hang out. 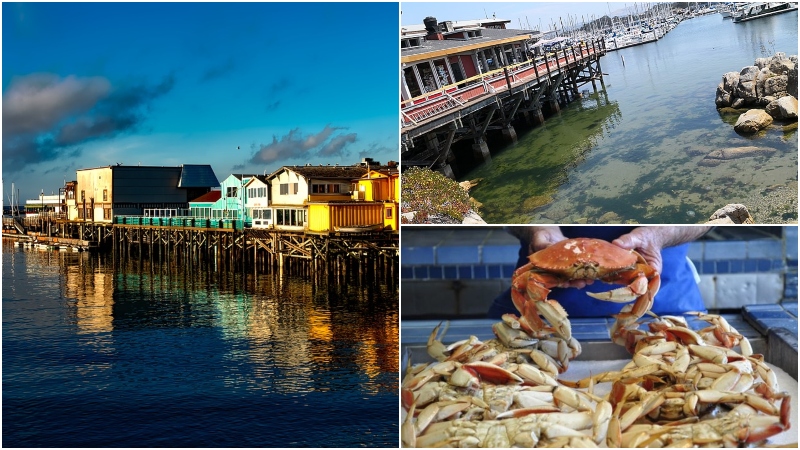 Drive further south for an hour to reach the Old Fisherman’s Wharf at Monterey.

This wharf was once used for commercial fishing, but nowadays, it’s a tourist magnet along the Pacific Coast Highway.

You’ll find the spirit of the wharf’s past in the excellent seafood restaurants that draw most of the visitors today.

Some of the specialities served on this age-old wharf include varieties of seafood chowder, calamari, and fresh shellfish.

Every meal here comes with breathtaking views of Monterey Bay.

The Old Fisherman’s Wharf also has shops where you can find jewellery, clothes and gifts to bring home.

You might even encounter some of the local wildlife while you’re in the Monterey area, including orcas, pelicans, sea otters, and seals. 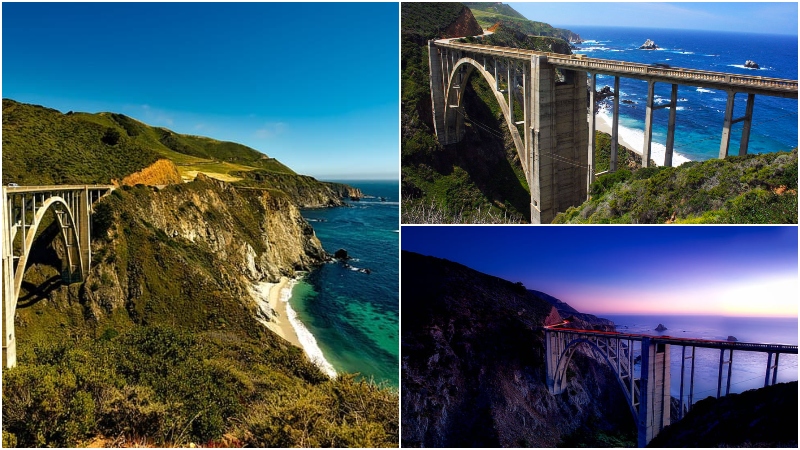 Constructed in 1932, this bridge is the highest of its kind in the world.

This bridge truly is a work of art, and it spans over the Bixby Creek that lies almost 90 metres below.

The dazzling cliffs along the coast and the structure of the Bixby Creek Bridge make this worth the stop.

Whether you’re into serious professional photography or quick selfies, this is one of the most photogenic spots along the coastal route.

Make sure you’re here around sunset, as the bridge, the cliffs, and the beaches in the deep are covered with a magical light. 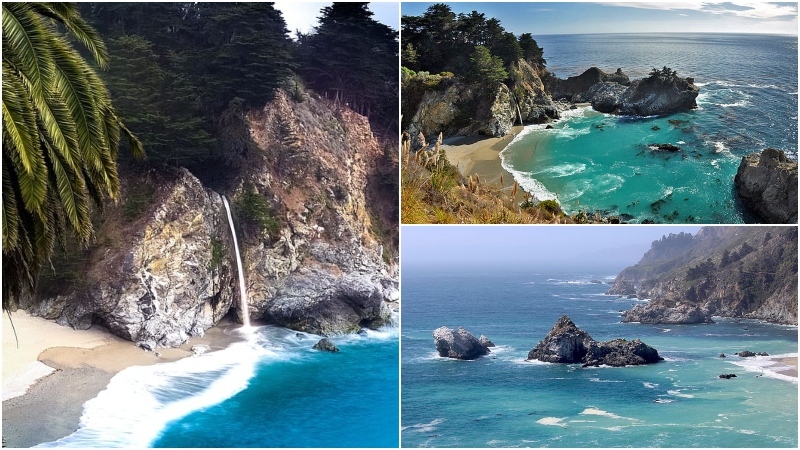 Although modest in size, the Julia Pfeiffer Burns State Park packs some of the region’s most incredible natural scenery.

Take a break from driving and soak up the amazing features of this park, from the towering cliffs to the ancient trees and a waterfall.

Follow the panoramic trail above the McWay Cove and watch a 25-metre high waterfall plunge down onto the sand.

From the trail, you’ll also have a glimpse of California’s endless coastline and beaches.

A particular type of flora here is the redwood trees, some of which are estimated to be 2500 years old.

If you’re a nature lover, the Julia Pfeiffer Burns State Park is a must-stop on a Pacific Highway trip. 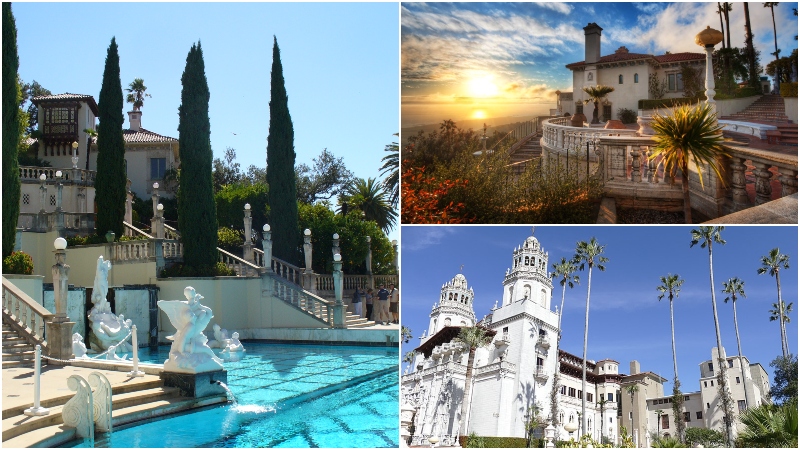 This glamorous mansion is based in San Simeon, a coastal settlement that’s been inhabited for thousands of years.

Hearst Castle is a historic dwelling with roots in the 19th century, and it’s the town’s most visited sight these days.

The house was built by George Hearst and inherited by his son William Randolph Hearst, a media tycoon and well-known politician.

The best way to explore this splendid manor is through a guided tour, during which you’ll get to discover grand rooms full of ornaments and other chambers.

Some of the highlights include the outdoor Neptune Pool and the Roman indoor pool, impressively designed baths.

The visitor centre is an attractive place to have a meal or a cup of coffee in the cafe. 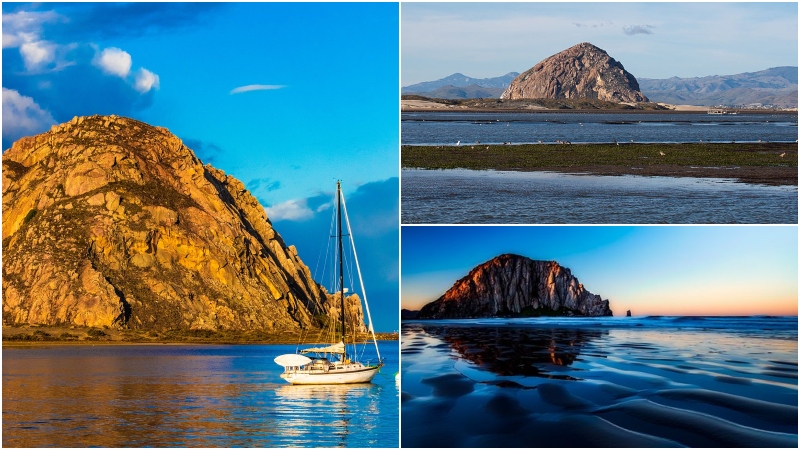 Next stop of your journey: Morro Rock at Morro Bay.

This mammoth rock formation is visible from afar, as it rises straight from the ocean at an elevation of 177 metres.

Although it looks like an ordinary block of rocks, Morro Rock is actually part of a chain of dormant volcanoes in California known as the Nine Sisters.

Apart from views of the one-of-a-kind rock mountain, you might have a chance to observe some of the unique wildlife.

Morro Rock is home to rare peregrine falcons, cormorants, while sea lions and sea otters are often seen in the ocean.

The rock is accessible by car, and you can explore the area via walking trails.

Arguably the best viewing point is Morro Rock Beach, which is located just northeast of this iconic volcanic phenomenon. 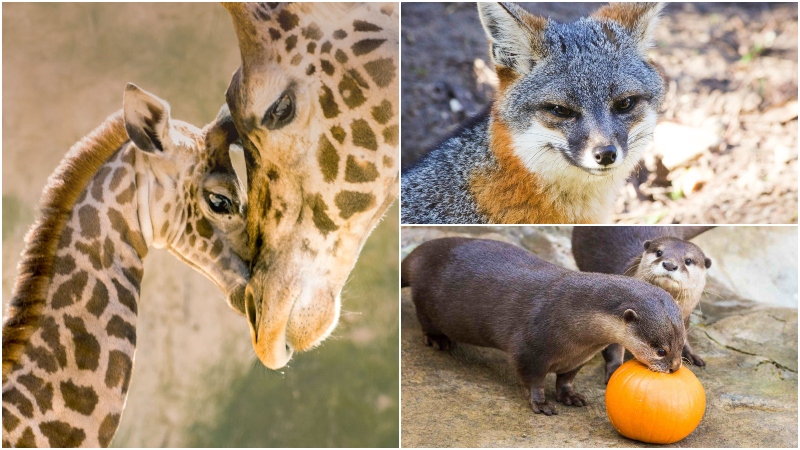 It takes a couple of hours to reach the next highlight along this legendary road: the Santa Barbara Zoo.

Santa Barbara Zoo is home to almost 150 animal species, ranging from mammals to birds and the tiniest insects.

Are you travelling with your family? Make sure not to miss the giraffe feeding session or ride the zoo train to see the park in a relaxing way.

Sign up for other feeding sessions, including those with the condors, penguins, and tortoises.

The Santa Barbara Zoo is part of a conservation program that aims to maintain genetic diversity and safe species from extinction. 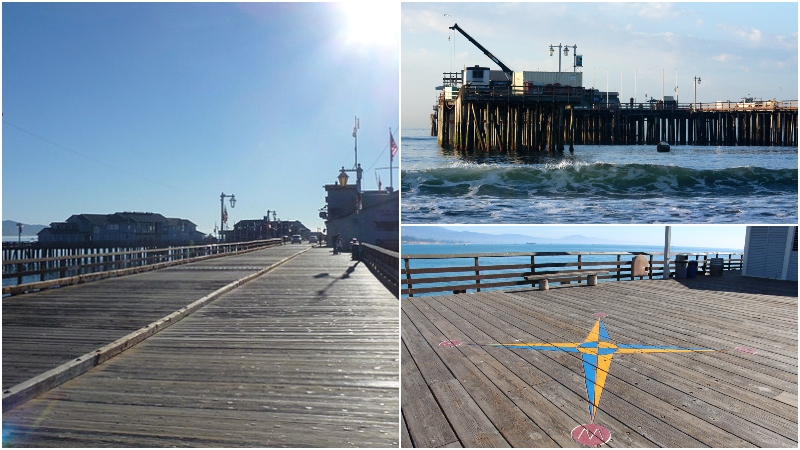 After a wee drive from the zoo, you’ll reach Stearns Wharf, which is also based in Santa Barbara.

Stearns Wharf is another fine example of an old fishing wharf repurposed into a multi-functional location on the Californian seashores.

This wharf houses restaurants, boutique shops, and the Sea Center aquarium with some of the local marine creatures.

The Sea Center is home to stingrays and sharks.

You’ll also find an information board on other ocean life.

Are you building up an appetite? Char West dishes out praised fish and chips, while The Harbor Restaurant has a menu with high-quality meat cuts, cocktails, and wines.

Other places to stop by include gift shops, candy shops, and an ice cream stand.

To see the area around the pier, take a sunset cruise on a luxurious yacht with Celebration Cruises. 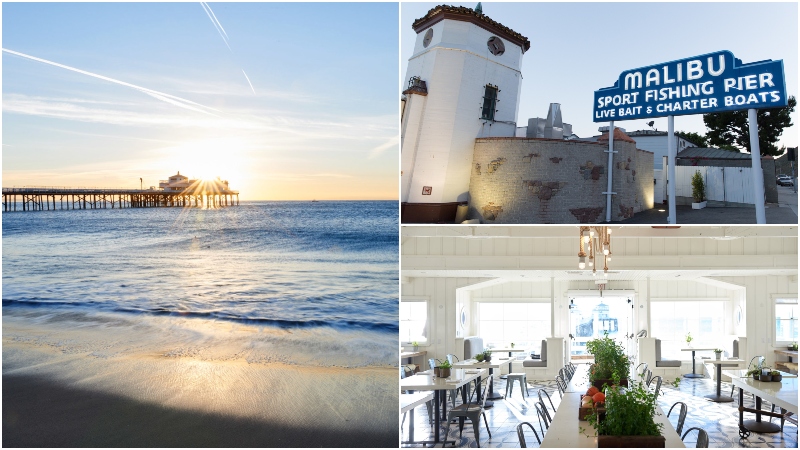 As you’re approaching Los Angeles, make sure to stop by Malibu Pier for an amusing break.

Malibu Pier is a world-famous symbol of California and the Los Angeles region, and its history goes back to the year 1905.

Originally a shipping place for goods, the Malibu Pier is now an epicentre of entertainment.

Revel in the views of this pier at the Malibu Farm Cafe, that has an outdoor terrace and a homely indoor dining space.

Bring home some memorabilia from the Ranch at the Pier gift shop, look for jewellery at the cute Miansai shop, and find wondrous handicrafts in the Alkemie Road.

The shops also rent out fishing rods and bait, in case you want to try your luck with fishing.

If you prefer to be in the water, there’s a chance to rent surfing boards or Standup Paddle Boards. 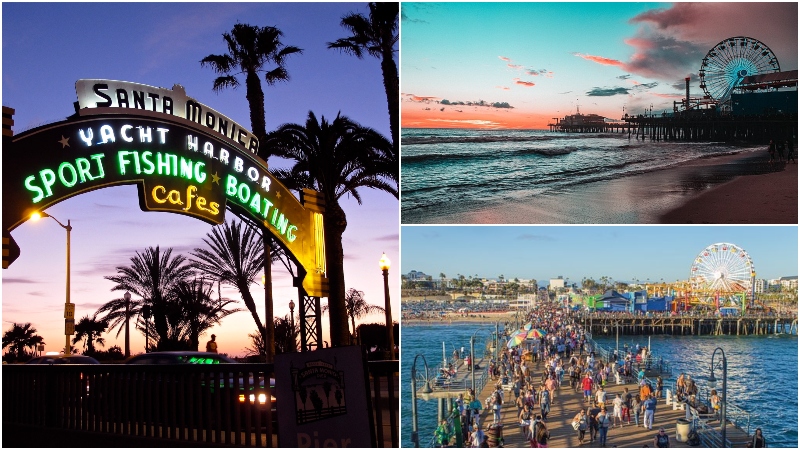 A short drive away from Malibu you’re entering Santa Monica, home to another favoured pier.

What started as a spot to dump sewage and a fishing community’s favourite, is now the area’s main hub of amusement.

Santa Monica Pier is very lively, with a theme park, street performances, and neat shops to browse through.

If you’re travelling with kids, they’ll love the Ferris wheel which offers fantastic vistas over the shoreline, Santa Monica and the pier itself.

Furthermore, the Santa Monica Pier has numerous shops, such as 66 to Cali, dedicated to the legendary Route 66.

You’re also allowed to fish on the pier.

Bait and rods are available at the Bait & Tackle shop. 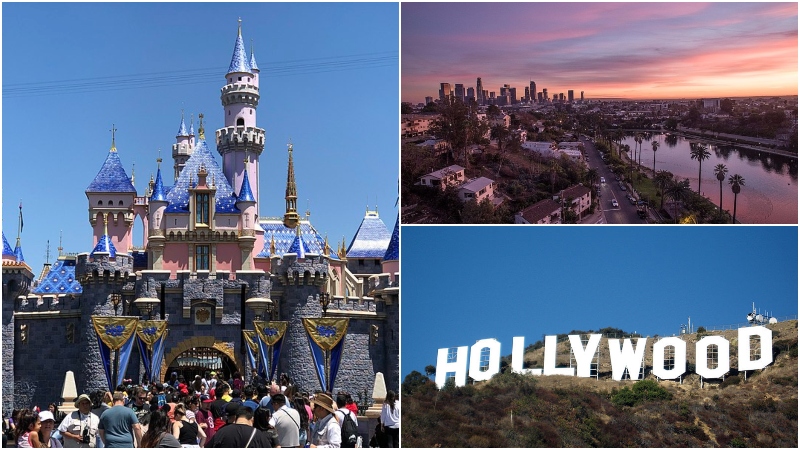 Finally, you have arrived at the last stop of this remarkable driving adventure.

After more than 700 kilometres of driving, you’ll reach America’s capital of entertainment and fame.

Los Angeles is home to the illustrious suburb Hollywood, the Walk of Fame, an abundance of museums, and amusement parks.

Enjoy a fun day out at Disneyland Park Los Angeles, or relive the best movie scenes created in Hollywood at the Universal Studios.

If you’re into shopping, Beverly Hills and Santa Monica are hard to beat if you’re pursuing designer brands.

How Long is the Pacific Coast Highway?

The total length of the Pacific Highway is 1055 kilometres or 655 miles.

This route from the Golden Gate Bridge to Los Angeles, however, is 743 kilometres, or 462 miles.

To incorporate enchanting landmarks, natural features, and entertainment on a tight schedule, a route from the Golden Gate Bridge to Julia Pfeiffer Burns State Park is recommended.

This journey covers 432 kilometres or 269 miles.

Where is the best starting and finishing point on Pacific Coast Highway?

If you have time to explore, don’t hesitate to drive the entire trip from the Golden Gate Bridge to Los Angeles.

The Golden Gate Bridge is an absolute must-see, so it’s wise to at least start or finish your road trip in San Francisco.

If you’re making your way to Las Vegas instead of Los Angeles, you can complete the journey from the Golden Gate Bridge to Morro Rock.

Whats the best car to drive on Pacific Coast Highway?

Basically, you can tackle the Pacific Coast Highway with any kind of car.

Despite the windiness in certain parts, the roads are generally in good condition, with even surfaces.

If you’re comfortable driving larger cars, it’s worth upgrading to an SUV for a feeling of extra safety. 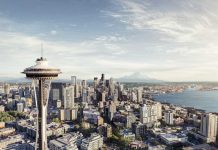 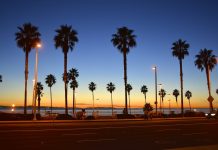